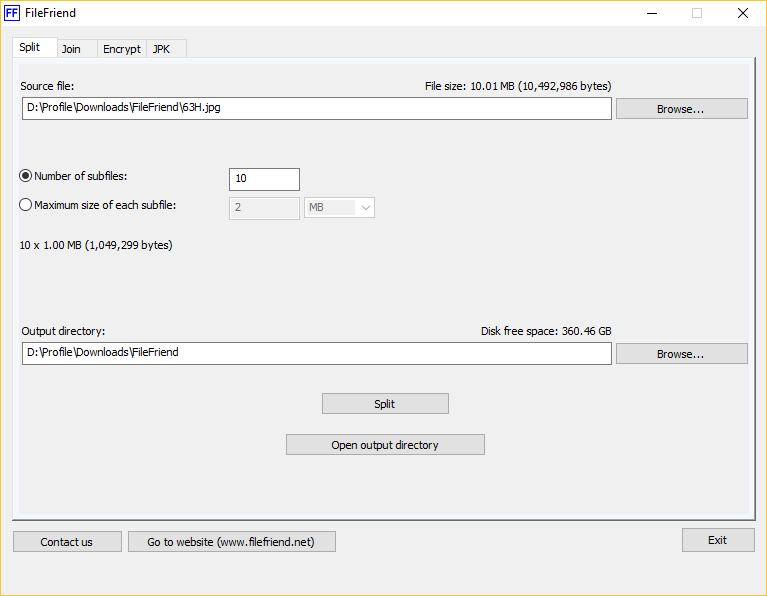 FileFriend is a tiny portable toolkit which can split, join, encrypt or hide your target files in a JPG.

The program organises its simple interface into four tabs: Split, Join, Encrypt and "JPK" (pack a file or folder inside a JPEG).

The Split function enables splitting a target file into a fixed number of subfiles, or you can just give FileFriend the maximum size of each subfile and it'll figure out the rest itself.

Drag or drop the subfiles into the Join panel later and it'll restore the originals in a click.

The JPK function is a simple tool for hiding a file or folder inside a JPG. Point the program at a target image and the payload files, enter a password and they'll be saved. The same pane can be used by a recipient to view a list of files in the folder, extract them, or remove them entirely (the JPEG is restored to its original state).

An Encrypt function encrypts a file or the contents of a folder using the password you specify.

BEWARE: to decrypt the destination files you must encrypt them again with the same password. If you encrypt with "password", accidentally enter "passwrd" to decrypt, the program will encrypt the files twice, and you'd need to use both passwords in reverse order to restore them. If the second password was a typo, there would be no way to do this and the files would be lost.

This isn't necessarily a bad thing, as it means an attacker also only gets one chance to decrypt the files. But keep it in mind, and only ever encrypt files if you've backed up copies somewhere else.

There are many more powerful file split/ join/ encryption/ steganography tools around, but FileFriend squeezes a lot into its diminutive download, and its convenience, portability and ease of use are all pluses. Take a look.

Lock down your files with one of the most secure forms of cryptography.

Lock down your files with one of the most secure forms of cryptography.

A versatile suite of file-related tools

Hide and/ or encrypt files and folders

Hide sensitive files within others via this professional, powerful steganography tool

Where's all your hard drive space gone? Here's how to find out

Where's all your hard drive space gone? Here's how to find out

The first of many official tools to enhance Windows