Please wait while my feed loads

An open-source Risk-like board game

Your Rating:
Login to rate
Based on 0 ratings 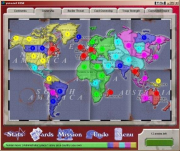 An open-source Risk-like board game

Domination is an open-source Risk-like board game, where you use all your military strategy skills to sweep across continents and capture the world.

You get various maps to choose from: UK, America, Europe, the classic Risk design, the Roman Empire, Lord of the Rings, and a variety of global designs. There are lots more available online, and you can even use a map editor to design your own.

You and your competing players (human or AI, local, network or across the web) then take it in turns to place armies in unoccupied countries.

After that, every player in turn gets a chance to attack their neighbours, maybe earning valuable cards (which you can trade in later for more units), placing new armies and reinforcing their positions, until one player remains.

That's just the core idea, of course, and there are plenty of twists and complications to keep things interesting, most of which are explained in a bundled manual.

The documentation could be better, and if you've not played anything Risk-like before, it might take a while to figure out what's going on. But once you've mastered the basics, Domination proves a fun game which should keep you entertained for hours.

Play a round of golf on your iPhone or iPad

An Amiga emulator for fans of retro computing

Please wait while my feed loads

WhatsApp Messenger is the world's most popular instant messaging app for smartphones.

You can use it to send and receive text and voice messages, photos, videos, even call your friends in other countries, and because it uses your phone's internet connection it might not cost you anything at all (depending on whether you'll pay data charges).

It's easy to set up and use. There's no need to create and remember new account names or pins because it works with your phone number, and uses your regular address book to find and connect you with friends who use WhatsApp already.

You can talk one-to-one or in group chats, and because you're always logged in there's no way to miss messages. Even if your phone is turned off, WhatsApp will save your messages and display them as soon as you're back online.

- New privacy settings allow you to control who can add you to groups. Admins will have the option of sending you a private invite instead. Go to Settings > Account > Privacy > Groups to get started.
- Added call waiting support so you can choose to accept an incoming WhatsApp call while you're already on another call.
- Updated Chats screen design to make it easier to quickly scan your messages.
- You can now send messages directly from the Braille keyboard when using VoiceOver mode.

You may try again in a few minutes or contact us to report the problem.