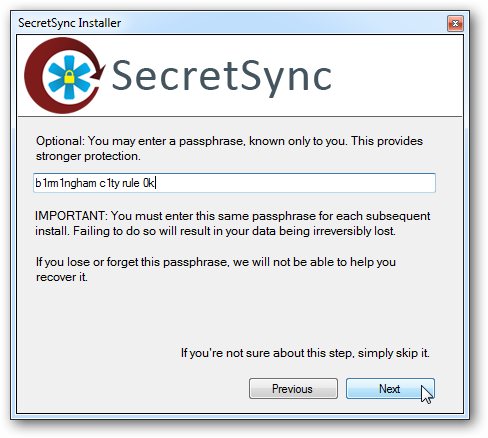 One drawback of using Dropbox as your online backup and sync solution is that the data is encrypted using a key that's stored on Dropbox's servers. Dropbox recently amended its terms and conditions to allow it to hand that key over to the authorities, giving them access to your precious data.

One way to get around this problem is to switch to a backup provider - such as Wuala, AVG LiveKive or SpiderOak - that stores the encryption keys on your computer, so the company has no means of accessing your data. Alternatively, take the process of encryption into your own hands by installing a program like SecretSync.

You can also use SecretSync with any other online backup tool, too, making it useful for services like SugarSync that also use client-side encryption. Just create the SecretSync folder where you like, then point your backup tool to that folder to back it up.

All of the fiddly stuff is handled during the installation process. Linux users should follow the installation guide at the SecretSync website, while Windows users should follow the setup wizard, which is largely self-explanatory. SecretSync is a Java app, but has no way of knowing if Java is installed on your PC – the first step of the wizard in Windows asks you specifically to verify this. If you’re not sure, open Programs and Features Control Panel and look for a Java entry.

You then sign up for a SecretSync account by providing your email address, entering a suitable password and clicking Get Token. Next, you'll be prompted to enter a passphrase, which we’d suggest doing to improve security even further, but note the dire warnings about the consequences for your data if you ever forget it.

The final step is to select the location of your Dropbox folder – and you’re done. Just install the software on any other computers you wish to access the encrypted data on, making sure you enter the same user credentials (including passphrase if applicable) in order to access the protected files. Job done.

SecretSync isn’t the first tool to offer client-side encryption of data for Dropbox users – BoxCryptor has that honor – but it has one major advantage: SecretSync also works in Linux, while an OS X build is promised in the future too.

With the free version, you can create an encrypted folder 2GB in size, which should be adequate for most people’s needs. If you need more space, you’ll be able to upgrade to a paid-for solution, which will cost $40 or $60 a year based on how much encrypted space you need. This is a hefty premium seeing as BoxCryptor charges a smaller one-off fee for unlimited encryption, or you could plump for a completely free solution by using TrueCrypt instead.

A simple and effective solution for those who want to encrypt their data before it’s uploaded to Dropbox, but potentially very expensive.

FinalCrypt 4.0.3 adds uncrackable encryption to your most sensitive files